November Project of the Month: University of Missouri Athletics 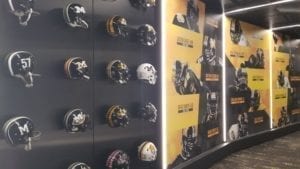 A Need for Customized Efficiency

Mizzou is a team with a history that dates all the way back to 1890. Their storage had rarely seen any big change, especially since their success on the field was always the first priority. But when the new equipment manager finally had a chance to make a change coming into Mizzou, he already had a plan in mind. Having come from the University of Louisville, where they had installed Spacesaver products for their locker room storage, he knew exactly what he wanted, so he called Bradford Systems. He explained how their current Wenger Mobile Carts just weren’t cutting it. They were hard to pull and couldn’t hold everything they needed it to. Moreover, Mizzou’s athletic storage was sorted by storage type, making it a huge hassle to prepare gear for practice and game days.


Focusing on the Player Perspective

While establishing the project details, a key part of the new layout was to sort the storage room by player. It needed to hold each player’s jerseys, pads, socks, pants, shoes, practice equipment, and four helmets. Not only would this help keep the players happy and organized, but it would also eliminate any hassles from a stocking perspective by being able to see what equipment each player was missing in their space. In order to do this, we installed Rousseau drawers and Spacesaver shelving into high-density mobile systems with mechanical-assist handles to easily get in and out of the isles. Not only would that help maintenance, but the mobile systems also doubled the amount of storage Mizzou had in the locker room without having to build out any new space. Using the same area footprint we were able to accommodate all the equipment they didn’t have enough space for before.

When a Plan Comes Together

The result is a facility that makes it a lot easier for staff to provide athletes with the services and equipment they need. There was no need for an additional space build-out or an expensive building expansion, everything was fitted to utilize the most amount of available space they had both, horizontally and vertically. In the end, both parties were extremely happy with the end result as it became a great, successful installation that hit every goal it had from the initial planning stages to the added features we picked up along the way. Everybody loves when a plan comes together.