Located just 16 miles west of downtown Chicago, the village of Skokie, Illinois is home to over 65,000 people and offers a way for residents to experience the city life without having to live in the thick of it all. In fact, it’s one of the things the fast-growing, livable suburb is especially proud of—so much that its tagline is “Skokie: A Suburb That Feels Like a City.”

With that fast growth came more than a few growing pains—particularly for Skokie’s police department. The department had outgrown the 27,000 square foot building it had been in many years before—the storage systems were inadequate and simply couldn’t support a modern police force. Many areas throughout the building were disorganized, crammed with gear and evidence, creating non-compliant areas and safety hazards. These conditions contributed to a lack of employee morale.

Recognizing these issues, the village planned to convert an abandoned 79,300 square foot plant into a contemporary police headquarters. Forming a “New Headquarters Team” comprised of department leaders, user committees, representatives from SRBL Architects, the local firm in charge of the renovation project, and representatives from Bradford, the goal was to discuss budgetary goals, key functions for the department, and the role storage systems would play in all of this well before embarking on construction.

Designing a Building For Its Employees

Barry Silverberg, Skokie’s Police Chief at the time of the renovation, made one thing clear—the first priority of the department was its people. “Employees truly appreciate it when you do things that helps them make their jobs easier,” he said. “What it boils down to in law enforcement is time savings and productivity. If you can create that, you’ll have higher morale and a higher level of service to the community.”

To contribute to this effect, one of the first systems that Skokie looked to improve was the storage for their officers—starting with their locker rooms. In the previous building, officers’ locker room offered minimum and narrow storage that didn’t have a place for all of the officers’ personal and professional items.

Based on the criteria from the department’s locker committee, we designed over 140 configurable officer gear lockers. Each two-foot-wide locker includes a bench that also doubles as a drawer for additional storage, double doors that open from the middle, adjustable full-width shelves, garment hangers for personal clothes and uniforms, modular electrical components with duplex outlets for powering and charging radios and other devices, notches on the inside of the doors for duty bag storage, and bracket assemblies to hold additional accessories.

For Silverberg, the options were a necessity in making sure his officers had everything they needed.

“A properly designed locker goes a long way toward the creation of a positive working environment. The lockers have had a huge impact of morale, and the attention to detail has paid off,” says Silverberg. 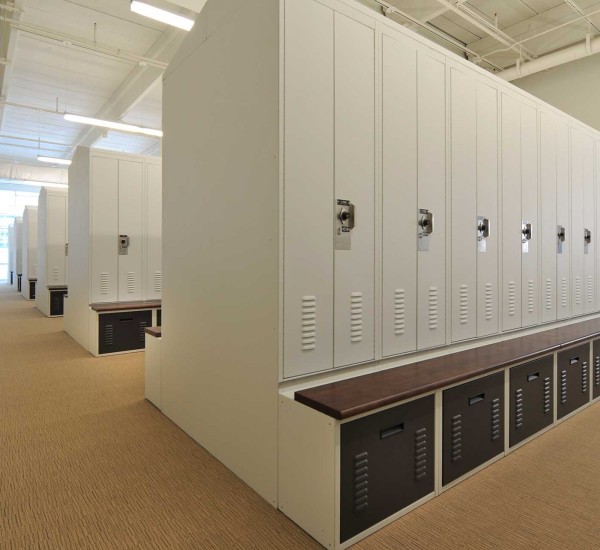 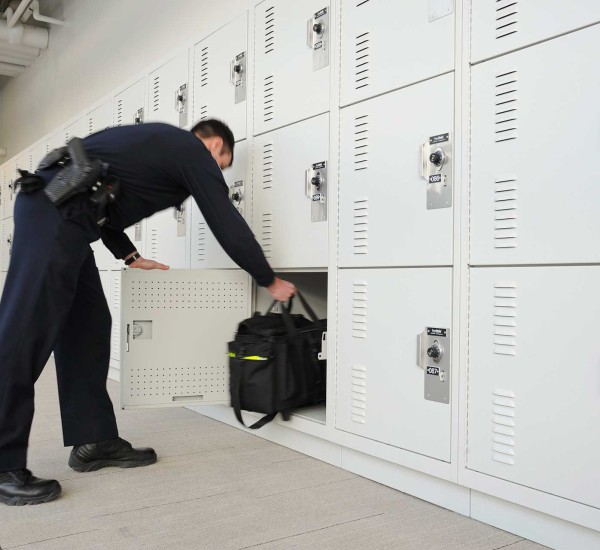 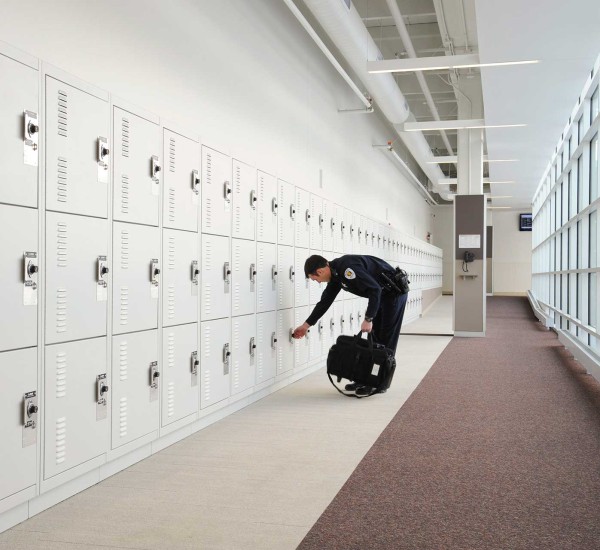 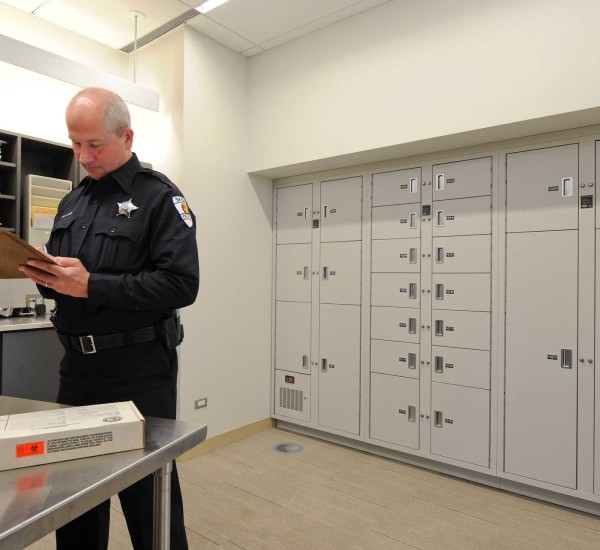 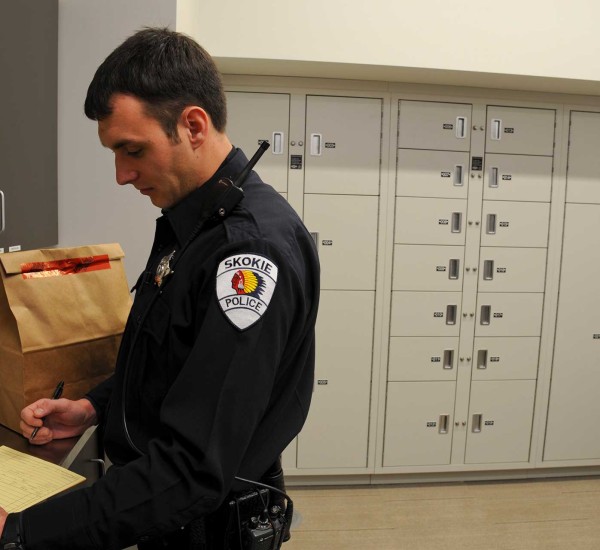 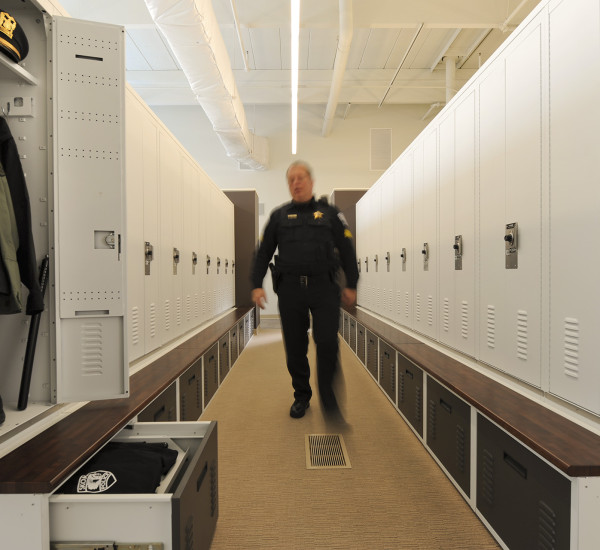 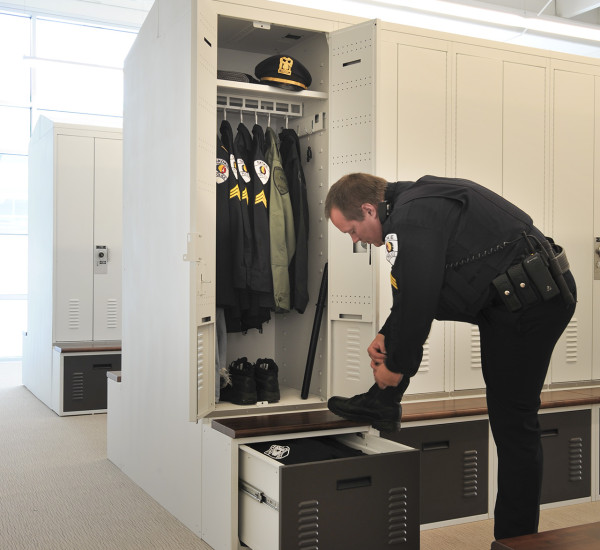 The duty of Skokie’s Tactical Intervention Unit (TIU) is to respond immediately to critical circumstances, such as hostage situations and barricaded subjects. The unit needed a storage system that would mirror their movement—organized, quick moving, and easy to access. For that reason, we took a slightly different approach with the lockers for this unit.

With the primary goals of readiness and accessibility, we designed 23 open-ended cubbies out of heavy-duty 4-post shelving. The cubbies feature shelves at various heights and provide immediate access to weapons, helmets, shields, gas masks, radios, and additional gear. 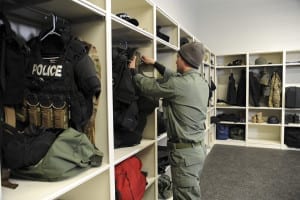 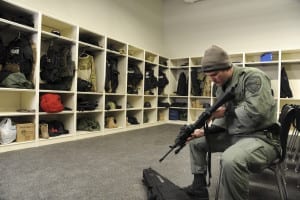 The cubbies were also built around one piece of essential equipment for the TIU—the fully loaded, 130-pound tactical vests they used during a post. Prior to the new lockers, the department wasn’t able to store the vests in the same place as all of the other gear, creating a bottleneck when it came time to get ready.

Our standard lockers we use in police department locker rooms were not going to cut it for the primary goals of readiness and accessibility. Therefore, we engineered 23 larger metal open-ended cubbies out of heavy-duty 4-post shelving for a more practical solution to mirror the quick-paced demands of the TIU. The heavy-duty cubbies features shelves at various heights that provides quick access to weapons, helmets, shields, gas masks, radios, and additional gear. The lockers include electrical outlets and heavy-duty hangers, which allow the officers to hang fully loaded tactical vests, which weigh about 130 pounds. Prior to this innovative and customized solution, the department was unable to store the loaded vests, which ended up creating a not so immediate unit that was needed.

The evidence storage at Skokie was a major concern. Skokie employs a total of 23 evidence technicians—and evidence is processed 24 hours a day, seven days a week. At the old station, the Property & Evidence room consisted of a converted janitor’s closet, and space was so tight that the technicians had to use the floor to package large pieces of evidence. Refrigerated evidence was kept in an old refrigerator secured by a padlock.

Silverberg knew the new building gave the department the opportunity to do things right. “Maintaining the chain of custody is paramount in the prosecution of criminal cases,” he said. “We knew we wanted to go as ‘high-tech’ as we could at the new facility for evidence storage.”

Given the longer periods of time required for holding certain evidence, coupled with the need to protect the integrity of evidence throughout the entire chain of custody, the department installed pass-thru evidence lockers to ensure protection for short-term evidence storage. The pass-thru feature allows evidence to be dropped off on one side and retrieved from inside the Property & Evidence room, guaranteeing chain of custody preservation.

Thanks to a variety of different compartments, the lockers accommodate evidence of all sizes, and also include four double-walled refrigerated components for biological evidence storage.

Skokie’s long-term evidence storage also required an upgrade. A high-density mobile system was installed to capitalize on space and compact the department’s evidence inventory—while creating enough space for ongoing growth. The Village is home to one of the most popular shopping malls in the Chicago area, and one of the largest issues was continually processing and storing large volumes of stolen merchandise. With a compact mobile storage system, there’s no longer concern about where to put the evidence.

“The buzz in law enforcement is to do more with less—and stop complicating things,” says Police Chief Silverberg. “The mobile system, combined with the evidence lockers, allows us to tighten the chain of custody and do what we do much more effectively than ever before.”

Whether your department is going through new construction, renovation, or simply wanting to create more space in a current building, we can help. Contact a storage expert today to start a conversation