Built over a hundred years ago and located in the heart of the city’s vibrant downtown, the St. Louis Central Library’s architecture has been a “must-visit” for visitors all over the world. Cass Gilbert, the library’s architect, was famous for Manhattan’s Woolworth Building and Washington DC’s United States Supreme Court Building—and the Italian Renaissance style he favored can be seen in the beautiful library’s elaborate construction.

The library was big on history—but small on remodeling throughout the years. The city realized the building needed some help—there were several safety issues and fire hazards, gaps in the floor allowing sight down to the bottom level, and other structural issues. In addition, the building’s close proximity to a river reinforced the need to prevent any damage in the case of seismic activity—the current building would be unstable and dangerous in the event that an earthquake did take place.

While the structural issues were certainly a concern, the library’s staff also realized that the building lacked the things that people were seeking in a public library—collaboration spaces, computer labs, conference rooms, additional study spaces, and more. Libraries were built around the ideas of books—and with the transition to digital, the St. Louis library knew they a perfect opportunity to transition the purpose of the library right along with the structural renovations.

In order to open up the space and create a sleek, modern appearance in the historic building, the library’s staff knew that everything started with the shelving and storage solutions they’d be able to create. The smarter they planned out the storage, the more space they’d be able to do other things with. Having worked with the library on a separate off-site storage project several years prior, we knew we would be able to create the exact space they were looking for. 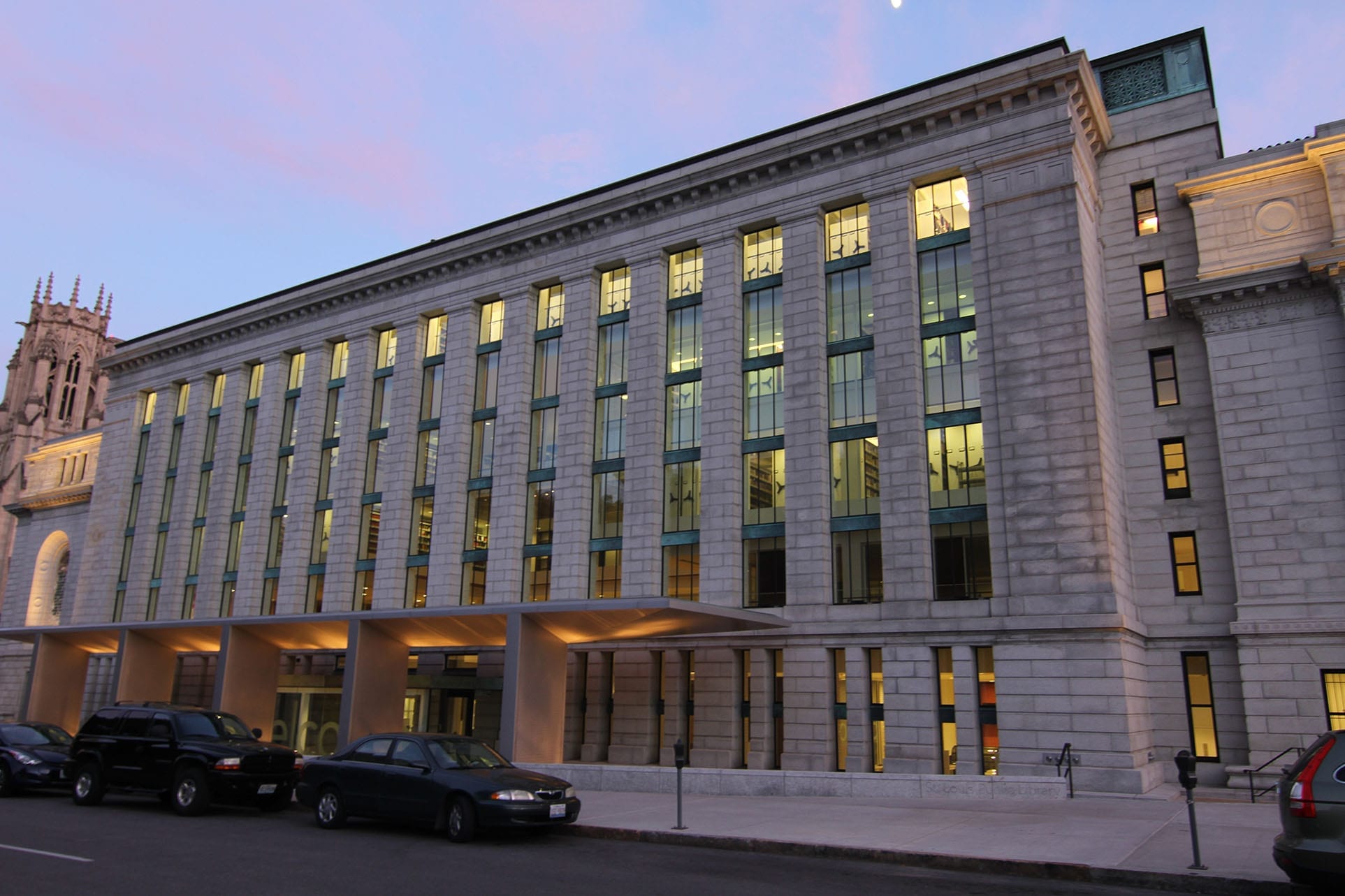 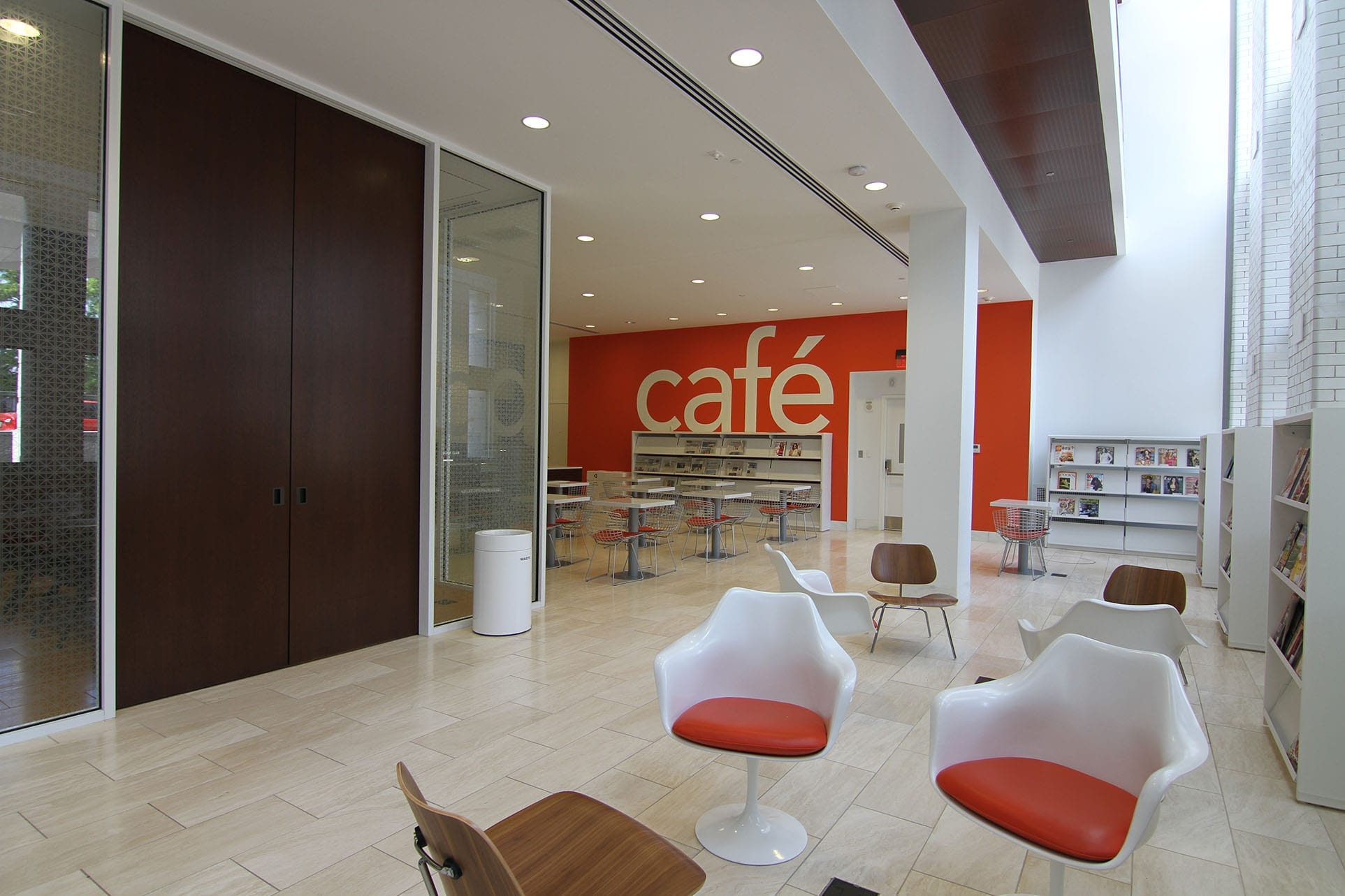 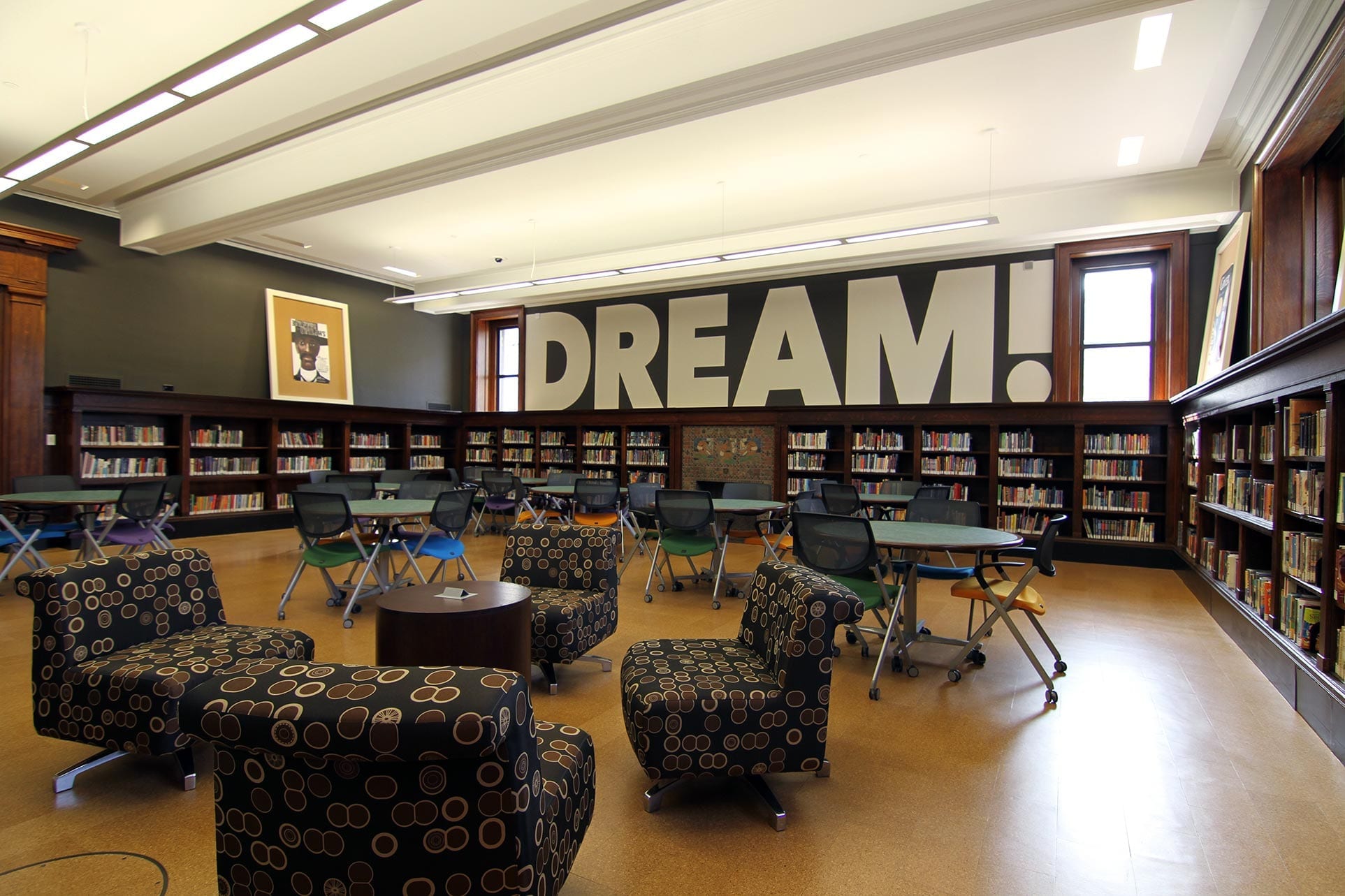 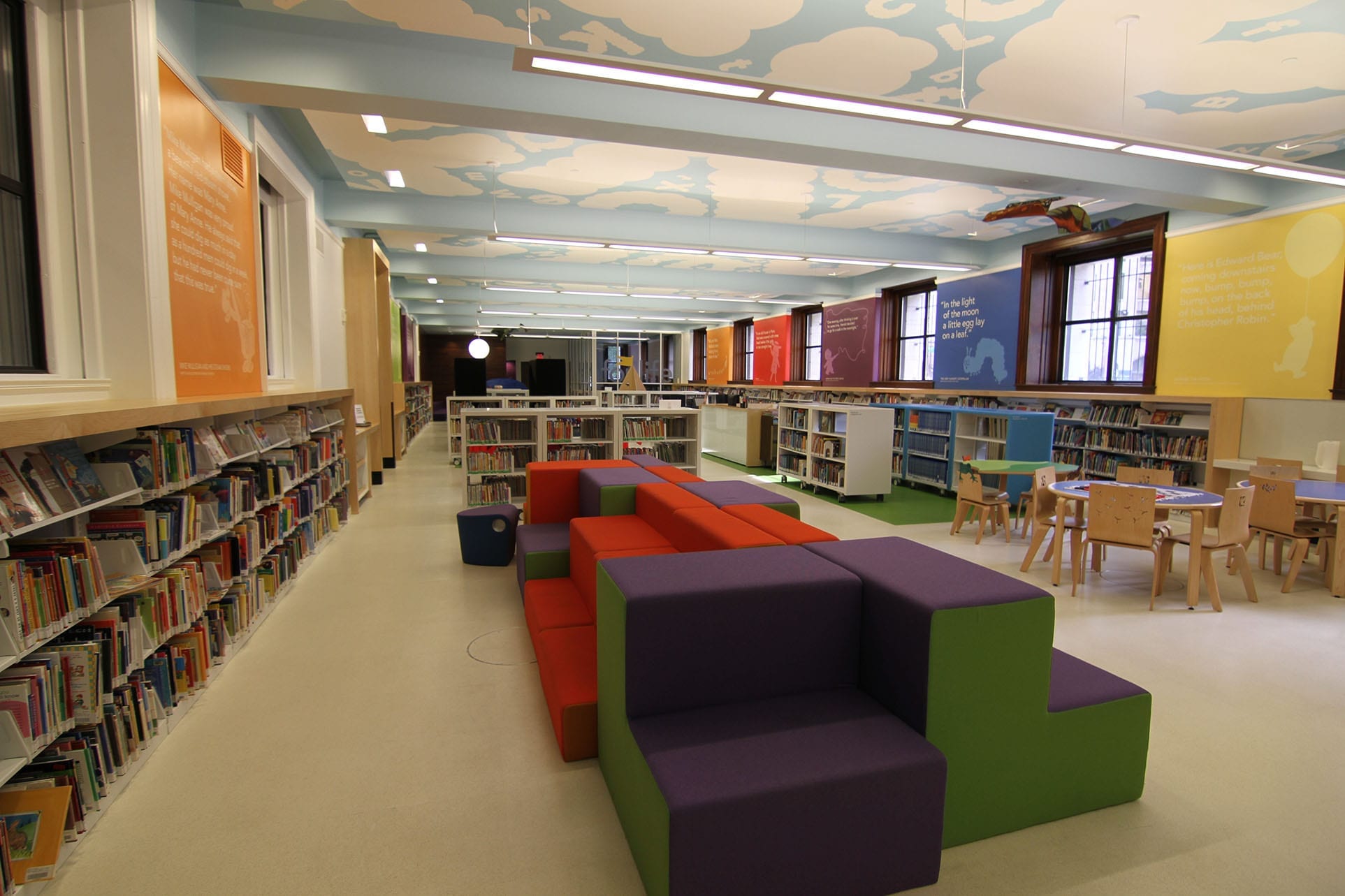 The Reinvention of “The Stacks”

Out of all of the interesting architectural details of Cass Gilbert’s Library, the biggest engineering feat was the “stack towers”—seven-story tall shelves that held the bulk of the library’s books for the majority of its existence. The stack towers were self-supported, and designed with glass floors to distribute light throughout the footprint.

However, this created several hazards. As the stack towers was essentially a chimney, it certainly wasn’t the type of space you’d want to have millions of books. And, the stacks were from another era—one where a patron would utilize a card catalog to find the book they wanted—and then hand that card over to a librarian, who would go into a stack and search for the right title. This old-school system contrasted with the needs and wants of current patrons, who prefer to browse the shelves themselves.

To assist in the modern transformation of the library’s book collection, the self-supporting stack structure was completely removed. New floors were constructed and high-density mobile storage units were installed on several of the floors to allow the books to be more available to public use. 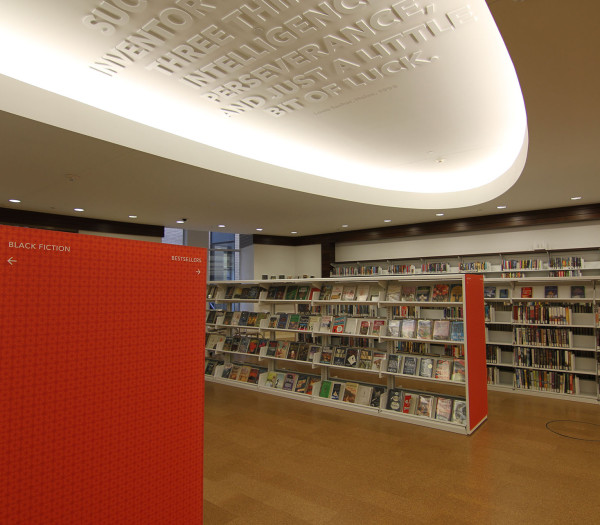 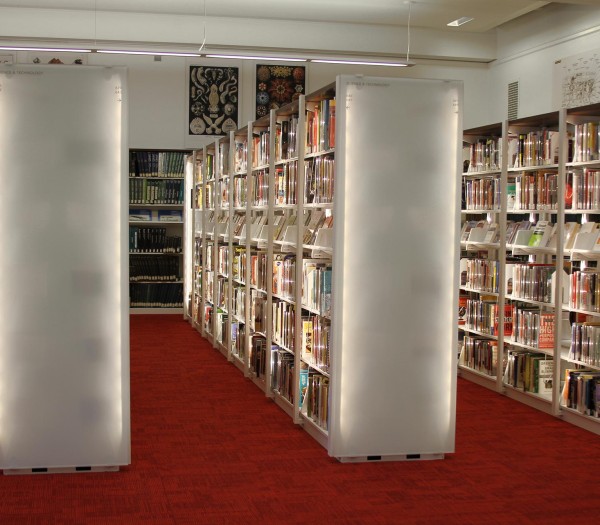 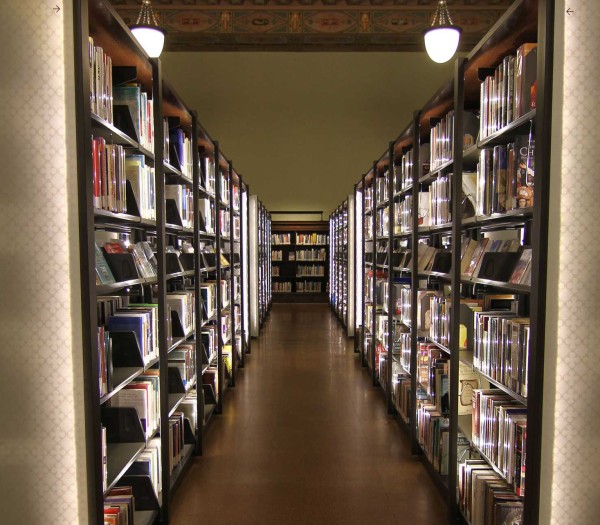 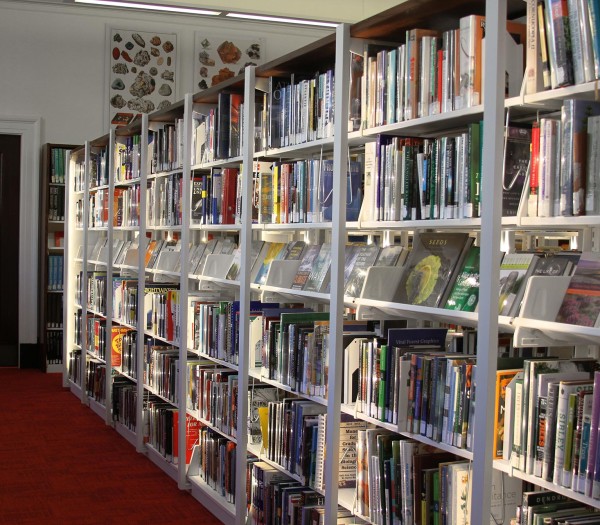 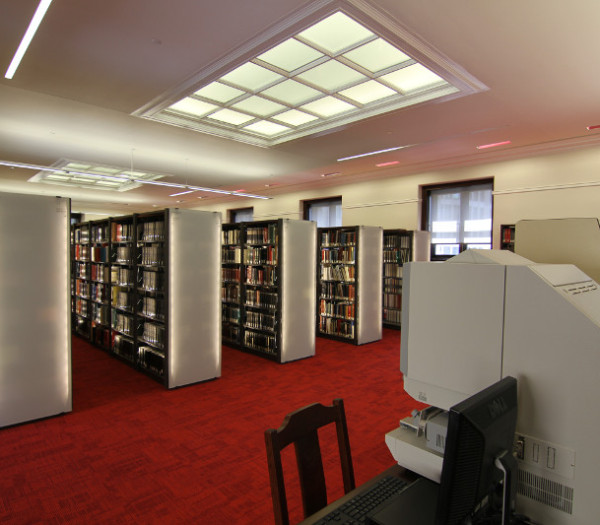 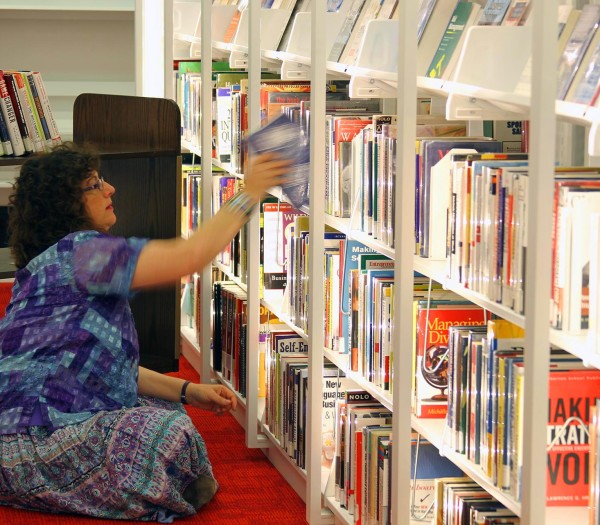 Allowing Books to be Front and Center

Part of the goal behind transitioning to modern was to not simply push books off to the side in favor of iPads or other technology. To help, we designed static cantilever shelving to be used throughout the public access areas of the library to allow for easy browsing. Some of this shelving was installed directly into the library’s original wooden bookshelves to continue to preserve that history while allowing for an easier way to browse volumes.

Several custom features, including LED lighting and designed end-panels, were also integrated into the final design of the cantilever shelving. The lighting was created for the Fine Arts, Science & Technology, and Rare Books rooms—and was installed via a special base to make the lighting look like part of the shelving. This made the area easier to view, but didn’t detract from the historic chandeliers and ornate ceilings of the library. Additionally, the library was able to create significant cost savings by using the LED instead of traditional fluorescent lighting.

In the Fine Arts room, custom glass end-panels feature LED lights inside the glass, while bright red acrylic end-panels showcase a modern look with the cantilever shelves in the Library’s Center for the Reader.

Library storage for all ages

Relating to a wide age range was another goal of the Library. For the youth section of the library, cantilever shelving was designed with a custom base and placed on heavy-duty casters so that the needs for the mobile carts could be changed on the fly. The colorful and inspired space combined with the configurable library storage to create a dynamic space for young library patrons.

A Blending of Old and New

Thanks to a thoughtful blending of historical architecture and modern storage systems, there is now plenty of space in the St. Louis Central Library that can be used for other functions. The library now features a teen room, study areas, lounge seating, a small theatre-like viewing center, a café, a book club meeting room, and a studio for music listening and movie viewing.

The Library is living, breathing proof that libraries can and are evolving—with a little help. 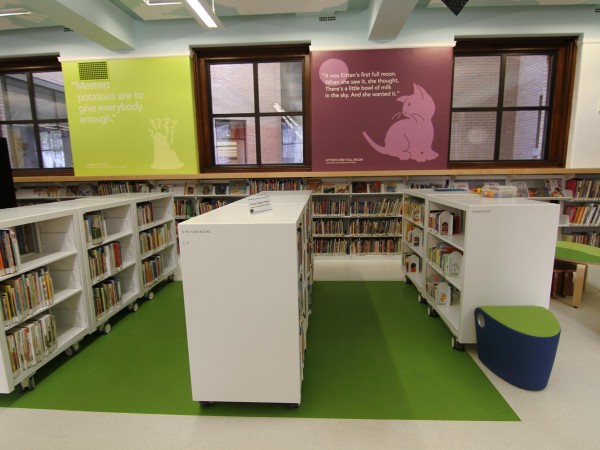 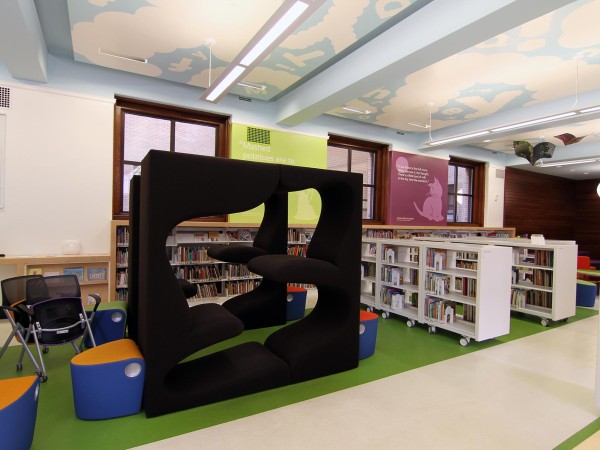 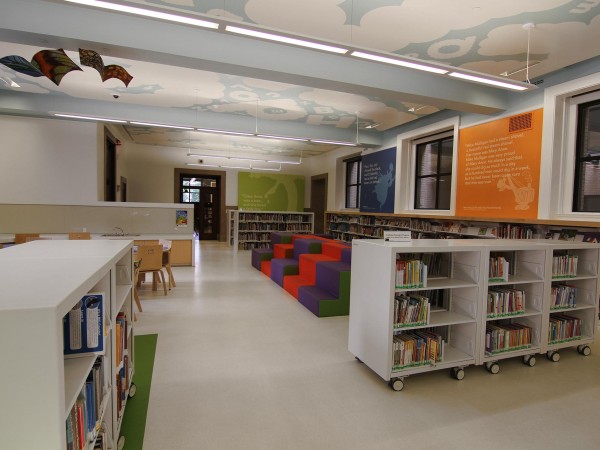 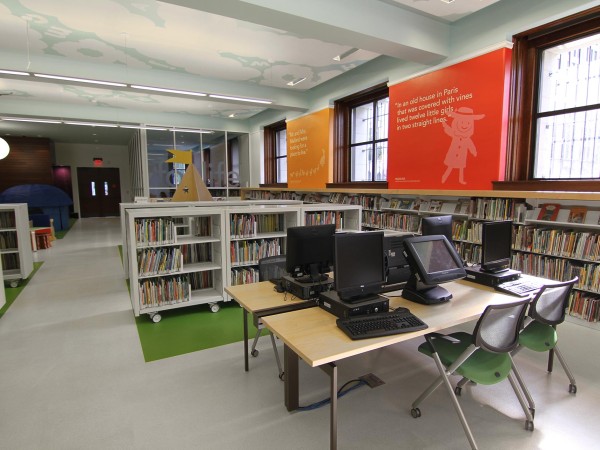 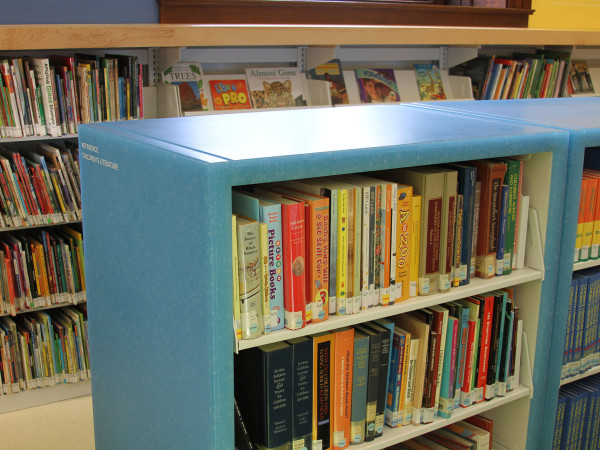 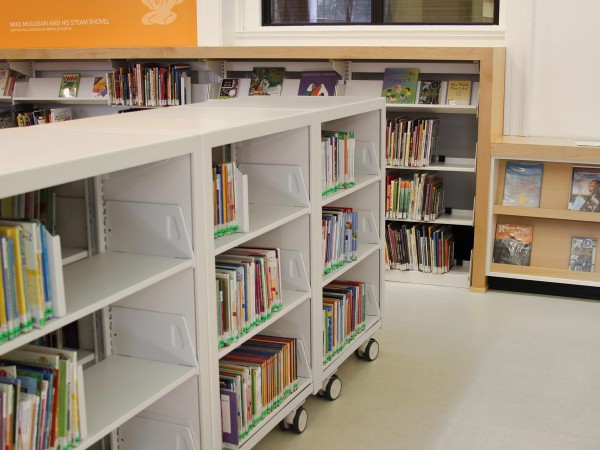 Looking for storage that can help you transform your library space? To get a few ideas, browse through our Library Lookbook:

In libraries, not every storage challenge is created equal.
Contact us for a complimentary space assessment to find out how we can solve yours.